As I am waiting for the cake to cool down, thought I'd post...

I've had a thoughtful weekend, the front page of The Independent grabbed me on Friday. THe was a huge article about how British plastic waste ends up in China causing pollution. The effects on children and adults are just awful. The article is here for anyone interested. I already seperate my rubbish, and plastic that can be recycled (which does not include yougurt pots and margerine tubs!) is picked up. However I began thinking about how further I could reduce our household waste.

Try and buy meat only from the butchers = less packaging.

Only buy loose fruit and vegetables unless packaged in recyclable materials (I sometimes buy "nice" tomatoes, and they come in silly plastic dishes.

Cut down on bought cakes and biscuits etc and make more attempt to make my own - hence the Lemon Drizzle cake I made today! Recipie was found here.


I was reminded today in church that although we can sometimes feel helpless against the bigger and darker forces that seem unable to be beaten, that as a Christian I have access to an Almighty God who's power we can tap into through prayer.


My sister has blogged!!! yay, go Esther!!! And I'm going to put her pic here, coz I love it! I took it when she was pregnant with Troy, she doesn't like it, she says it looks like she doesn't have a neck! 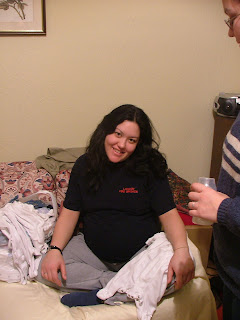 
Luke got his pronounciation slightly wrong when he announced to me that I had a "china", and that boys don't have chinas they have willies... you guess what he was trying to say!
Email ThisBlogThis!Share to TwitterShare to FacebookShare to Pinterest

I cant believe you have published the neckless picture of me! But all is forgiven, as you gave me inpiration to sart my very own blog! check it out @ starcreations.blogspot.com

Something else you can do, Ruth - compost! Ok, so plastic can't go in it, but pretty much all your paper and card, credit card receipts etc (once shredded) to act as brown matter to balance out the green (mostly grass clippings, like us!) matter.

Yup, do that already, got that bug off my dad who is a keen gardener. I try and encourage any friends who have even the smallest garden to compost!

Anonymous said...
This comment has been removed by a blog administrator.
9:24 am