See what a morning...

We've had a slightly unsual Easter Sunday, we tried to be on time for church, however, I was dettained rather longer than expected on the toilet! Then Ethan threw up 10 minutes into the journey to church so we turned back, changed him and tried to get there all beit 40 minutes late. However it was not to be, he was a little sick again, so we turned back for home. So we're having a relaxing morning and waiting for a service on the TV and enjoying some Christian music.

Had a pleasant few minutes rearranging my house flowers and an arrangement that was supposed to go to church! 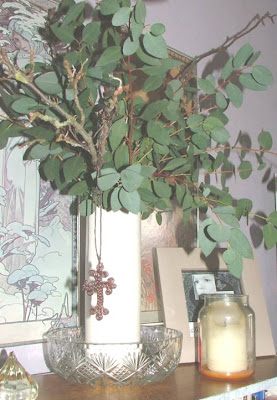 I don't wear a cross as I like to remember the power of the risen Christ, but this is a lovely handcrafted cross my sister bought me from Tanzania, I thought it would be appropriate to hang on my Easter arrangement, with the comfort that the cross did not hold Jesus there... HE is RISEN! 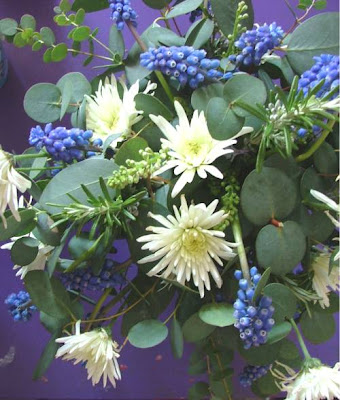 I did this arrangement without the white chrysanths for church, but when we didn't get there, I added these and they are now sitting happily on the table the boys use to draw and eat from when they're in the front room. 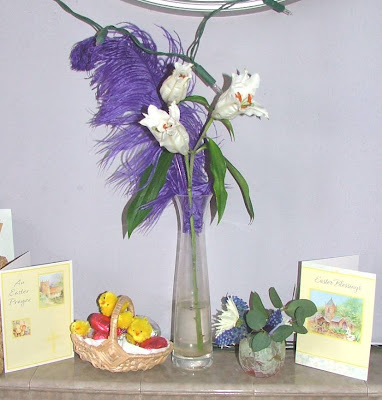 A little Easter collection of cards, chicks and easter eggs given to the boys from a lovely old lady called Enid who just spoils them rotten! Thought the purple feeather picked out the grape hyacinths in the smaller arrangement.

Been listening loads to some newly downloaded Stuart Townend songs, thought the words of this one were particularly apt for this day. I pray that you will know the true power of the Easter story throughout your life not just on this day.

See, what a morning, gloriously bright,
With the dawning of hope in Jerusalem;
Folded the grave-clothes, tomb filled with light,
As the angels announce, "Christ is risen!"
See God's salvation plan,
Wrought in love, borne in pain, paid in sacrifice,
Fulfilled in Christ, the Man,
For He lives: Christ is risen from the dead!

See Mary weeping, "Where is He laid?"
As in sorrow she turns from the empty tomb;
Hears a voice speaking, calling her name;
It's the Master, the Lord raised to life again!
The voice that spans the years,
Speaking life, stirring hope, bringing peace to us,
Will sound till He appears,
For He lives: Christ is risen from the dead!

One with the Father, Ancient of Days,
Through the Spirit who clothes faith with certainty.
Honor and blessing, glory and praise
To the King crowned with pow'r and authority!
And we are raised with Him,
Death is dead, love has won, Christ has conquered;
And we shall reign with Him,
For He lives: Christ is risen from the dead!

Amen! Happy easter, lovely arrangements, whenever I have flowers I am surprised how much they can brighten a room! Gorgeous colours and lovely displays

Ruth this is an amazing song too isn't it...
I love your flower arrangements too.. the simplicity of the first with the Cross Pendant is Wonderful!